We’re not talking here about the immersive floor-to-ceiling digital images of his famous paintings now on display around the world – including in Columbus – but of a very special exhibition titled “Through Vincent’s Eyes: Van Gogh and its sources “. This is an exhibition that will only be shown in two American museums and features original works by the famous artist who, after his suicide at the age of 37, became one of the most influential figures in the history of the western art. The work comes from 40 museums and on loan from private collections around the world. Three sister institutions in Ohio have also loaned art: the Cincinnati Art Museum, the Cleveland Museum of Art, and the Toledo Museum of Art.

To exploreVan Gogh, black heritage part of the 2022 program of the Dayton Art Institute

There is an important local connection which explains why the CMA was fortunate enough to put on this very special exhibition. Gregory White Smith, who grew up in Columbus, co-wrote “Van Gogh: The Life” with her husband, Steven Naifeh. 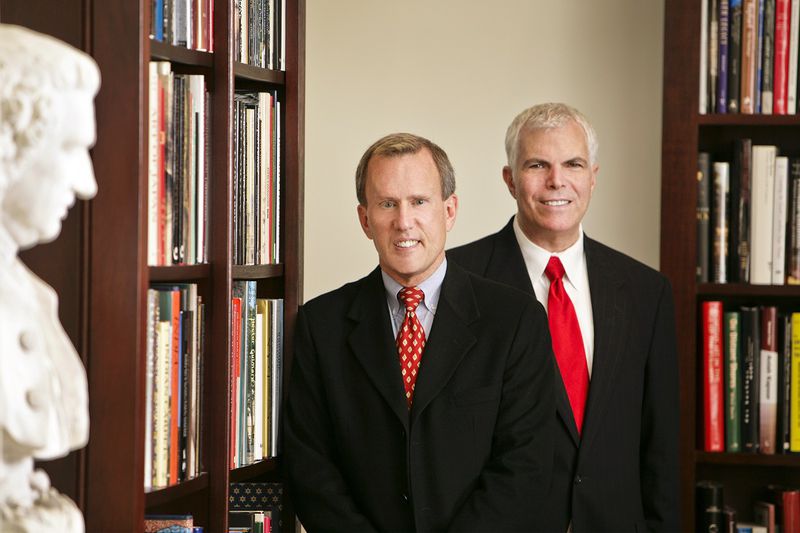 Naifeh and Smith won the Pulitzer Prize for their biography of Jackson Pollock. Sixty-one works from their personal collection are included in the Columbus exhibition. Naifeh is also the author of “Van Gogh and the artists he loved”. Smith, died in 2014.

“Greg Smith would be as honored as I to see our collection form the basis of this extraordinary and insightful exhibition at the Columbus Museum of Art, his beloved institution in his hometown,” said Naifeh, announcing the exhibit which honors his late husband. “He and I have always looked forward to seeing the works we own, from artists admired by van Gogh, side by side with the glorious works of van Gogh himself.

To exploreBest of 2021: Top 10 Food and Food Stories from the Dayton Area

Nannette Maciejunes, executive director and CEO of the Columbus Museum of Art, said the show was “wonderfully popular.” Patrons come back more than once and appreciate both the artists they recognize and those they discover for the first time.

She is obviously proud of the fact that two medium-sized museums have worked together on a show of this magnitude. “To put on a van Gogh show like this is a difficult task,” says Maciejunes.

Visit of the exhibition

If you are wondering how we know so much about the artists who left their mark on van Gogh, it is thanks to the more than 2,000 letters he wrote, mainly to his brother, Theo. Excerpts from many letters are incorporated into gallery labels and explain a lot about how van Gogh thought, the art he wanted to do, and the artists he admired.

“We all love van Gogh’s work, but the works illustrated here give us the opportunity to love the art that VG himself loved,” Naifeh wrote in the introduction to his book, “Van Gogh and the artists he loved “.

Paul Gauguin, Christmas Night (The Blessing of the Oxen), 1902-3. Oil on canvas, Indianapolis Museum of Art in Newfields. 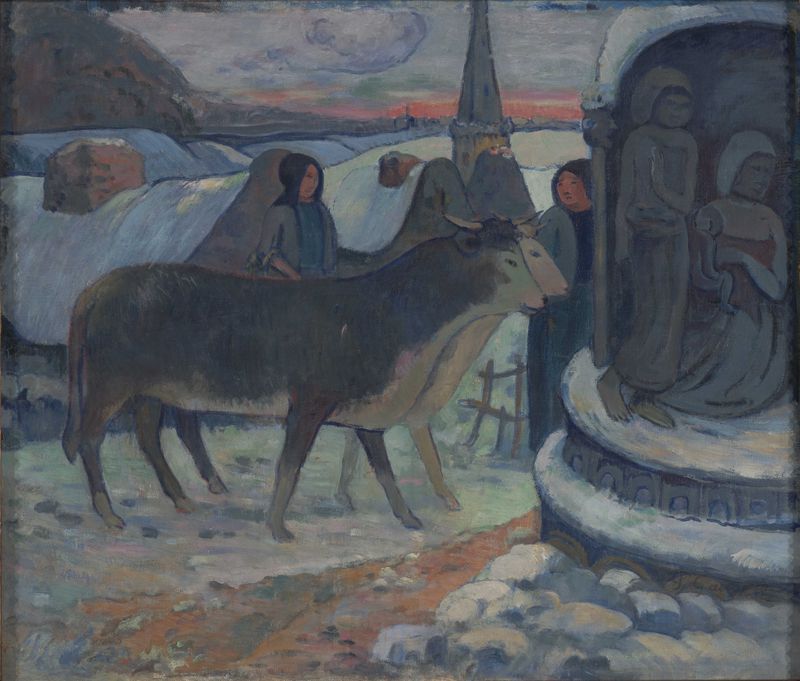 Paul Gauguin, Christmas Night (The Blessing of the Oxen), 1902-3. Oil on canvas, Indianapolis Museum of Art in Newfields.

You can’t miss the original van Gogh art; you’ll notice this the minute you walk into each of the rooms in the exhibit, as the wall behind each of the original rooms is painted with a blue stripe. Blue was one of van Gogh’s favorite colors and it is a spectacular way to highlight the main attractions of the exhibition. Around van Gogh’s original work, you will see the works of art and the artists who inspired it.

“It isn’t all exactly what you think of van Gogh,” Maciejunes says. “His career only lasted 10 years, but we have incredible art from his early work with his wonderful earth tones; the years of the Impressionist movement when he was in Paris, and the last months of his life which is the period most people associate with his work – expressive canvases in the vivid colors of the sea.

“Vincent’s Eyes,” she says, offers a fascinating glimpse into the creative process and how an extraordinary painter like van Gogh would have observed and absorbed the cultural milieu around him. “

Here’s a perfect example: in his 1888 painting “Tarascon Stagecoach”, van Gogh depicts stagecoaches parked in the town of Tarascon, in southern France. The painting was inspired by a novel by Alphonse Daudet, by the vivid hues of Claude Monet and by the heavily textured brush of Adolphe Monticelli. The painting was part of a suite intended to decorate van Gogh’s residence in Arles, France – the so-called Yellow House – in honor of the arrival of artist Paul Gauguin. The similarities and divergences between the approaches of various artists are explored through works such as “Peonies” by Édouard Manet which in many ways resembles “Roses”, a still life by van Gogh. “Roses” is painted with such thick coats of paint that, according to one of the artist’s letters, it took a whole month for the paint to dry. Manet’s work is the highlight of a section of the exhibition that includes paintings of flowers by Henri Fantin-Latour and Adolphe Monticelli, in addition to van Gogh’s “Poppy Vase”. 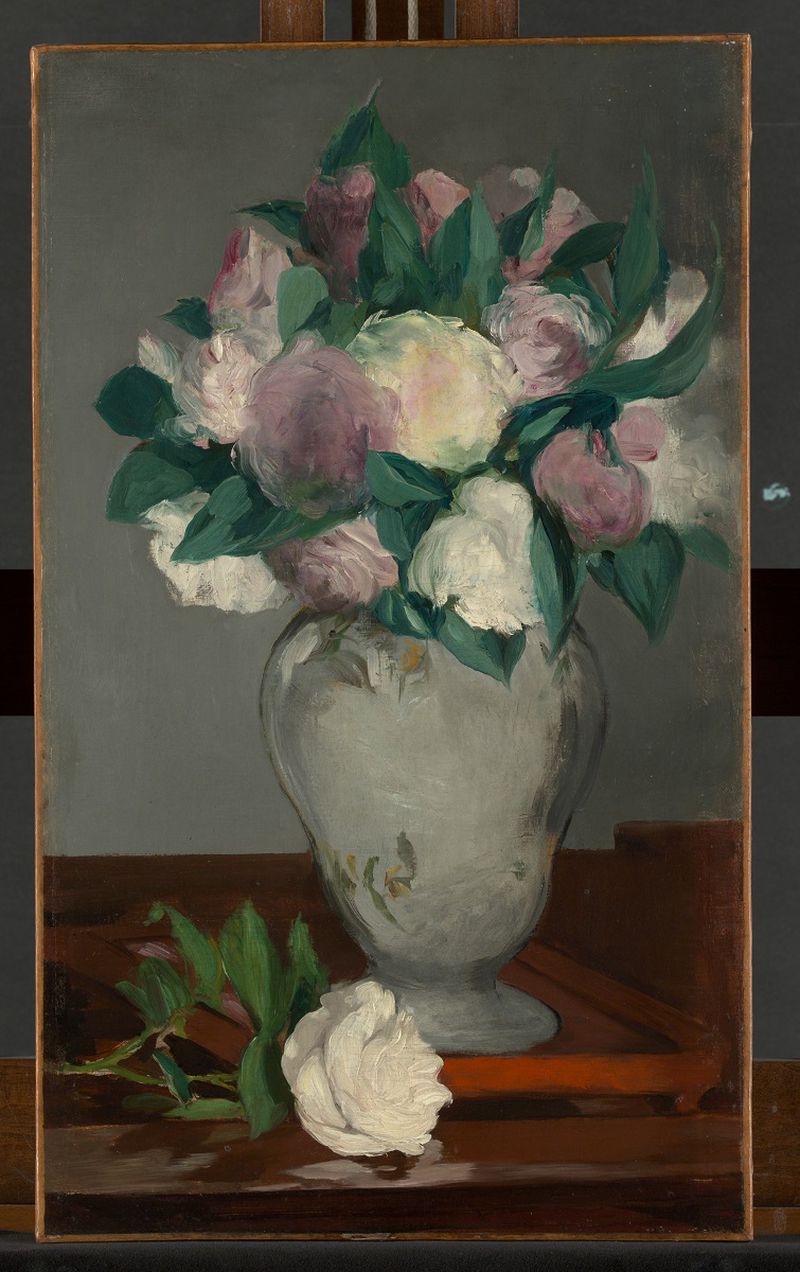 People may also be surprised to see Japanese woodcuts in the show. “Van Gogh loved Japanese prints and was influenced by the flat patterns,” says Maciejunes. “It’s fun to discover both visual and literary sources. He was a voracious reader, so the exhibition includes many first edition books. You will see the first editions of novels by Charles Dickens, Guy de Maupassant, Honoré de Balzac, Alexandre Dumas and Victor Hugo.

“This is an exhibition that helps make the artist’s imagination more tangible to us,” Stark said. “Van Gogh was a figure in art history known for the complicated, often troubled journey of his creative process. We have access to another dimension of his art and his life in this exhibition, another glimpse of what his world was like.

HOW TO GET THERE:

What: “Through the eyes of Vincent: Van Gogh and his sources”

If you want to learn more about van Gogh, consider these three excellent books, all available in the Columbus Museum of Art gift shop:

“Van Gogh and the artists he loved” by New York Times best-selling author, Pulitzer Prize winner and guest curator of the exhibition Steven Naifeh, published by Random House. The book includes nearly 300 color reproductions and an afterword by Ann Dumas, Assistant Curator of European Art at the Columbus Museum of Art and Curator of the Royal Academy of Art in London. ($ 40)

“Through the eyes of Vincent: Van Gogh and his sources,”A 320-page richly illustrated exhibition catalog designed and produced by Lucia | Marquand Books, Seattle, and distributed by Yale University Press. ($ 60)

“Van Gogh: Life”, written by Steven Naifeh, co-curator of the Columbus exhibit and her husband, Gregory White Smith, who grew up in Columbus. Posted by Random House. ($ 28).

Several programs are presented as part of this exhibition and some are available free online. They include “Van Gogh in the Movies” with film historian Susan Doll (January 6); Classical art book club chatting “The Last van Gogh ”by Alyson Richman (January 13, $ 5 for non-members) and a talk by Ohio State professor Andrew Shelton (January 15).

There is also a one-act play, “Vincent”, presented live by the Red Herring Theater and a screening of the film “Vincent van Gogh: A New Way of Seeing” on February 7, in person only. Visit columbusmuseum.org and click on Events and Programs for more information on the full schedule of upcoming programs.